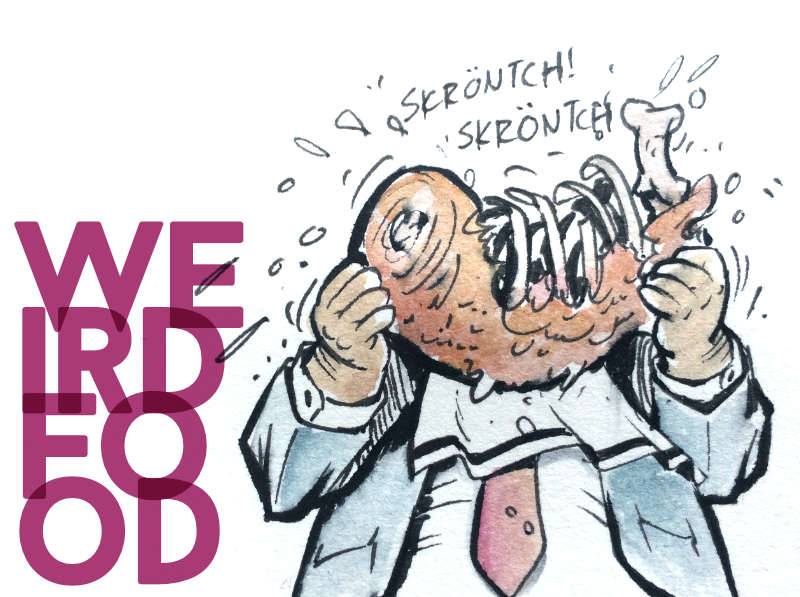 “Write more about weird food,” they said. They being friends of mine, curious about a far off land they may well never visit.

I filed the idea away and went about my day.

Days passed. With YL we completed some Exciting Bureaucratic ManeouversTM, bought a comfortable office chair, visited the street of second hand books, rode the metro and the bus, and got hungry. Ordinary enough.

We visited the Mao restaurant in the Haeundae area of Busan. We sat down, and opened the menu. To YL’s delight they had a slow-cooked pork stew. And Chinese bread buns. So we ordered those.

“This is the most authentic Chinese food you can order,” said YL, “When Koreans think about Chinese food, we think of this kind of stew and these kinds of buns, because Korean food doesn’t use either of them.”

And it was very tasty.

It was also the most nostalgic dish I had ever eaten in a Chinese restaurant. It was a “svinjski paprikaš” (pork and paprika stew) with fresh green lettuce and fluffy-yet-chewy white bread. It was a dish that you can find anywhere in the Balkans. Yes, there were two unusual spices, star anise and cinnamon. But this made it interesting, not radical.

This was truly a weird food experience. What represents Chinese food to YL, reminds me of the Balkans and home. It was a reframing food that drove home how food ties into the dynamics of us and them, binary oppositions, raw and cooked, all that jazz.

But enough anthropology and sociology diagrams. Listicle time. Five foods that some people will think are weird.

Yup. Swiss Cheese is not Swiss, it’s made in the US and it just means cheese with holes in it, similar to a shabby Emmental cheese. If you expect interesting cheese in the States, or non-Statesican cheese, you’ll likely not get it because raw milk dairy products have been restricted. For security, because bacteria in cheese kill. I suspect cheese in the US is more regulated than guns.

This plump, juicy fish fed the growth of Dutch towns in the miserable tidal swamps they were stuck in by the rising North Sea and encroaching Habsburgs and Bourbons. But its not grilled, baked, fried, cooked or steamed, oh no. It’s beheaded, gutted, cut into two fillets attached at the tail and a few posterior vertebrae, lightly pickled in brine and marinated in its own digestive juices. The result is one of the softest, creamiest, juiciest fish dishes you could imagine. Just google “hollandse nieuwe haring girl” for more exotica than you thought you’d ever see from a land of klompen and dijken.

Here’s another typical one. Donkey meat sauce. Tastes a lot like horse, which means: it’s delicious. Aside from Eeyor jokes, you’ll be fine. Romeo and Juliet? They probably ate ragù al asino. Nothing weird about that, just another herbivorous ungulate. This is where you’re in mental map territory, though – is a donkey food or fun? I’ll leave you to figure that out.

Just a language warning. Ragù is a meat sauce, typically for pasta. Ragout is a meat-stew main course. So, be careful which you’re getting, because Anglos don’t distinguish them and they both sound like RAH-goo.

We both eat horses, Swiss and Slovenes. Like I mentioned: delicious. Switzerland and Slovenia are also a lot alike in many ways. Alps, rivers, forests, isolated suspicious mountain communities, dappled cows. One major difference* is that Switzerland is about four times more expensive. Except for one thing: horse meat. That costs about the same in both places.

Why? In Switzerland it’s a cheap alternative to beef. In Slovenia it’s a delicacy.

Buckwheat is as traditional as you can get in Slovenia. Well, 메밀(memil) is also pretty traditional in Korea. Nice, finding out that you can get what is essentially old-fashioned comfort food in every food court, isn’t it? Yes. Yes it is.

This is where it gets unusual. The noodles are cooked, cooled, mixed with some meat, egg, vegetables or fruit, and ice. What you get is a cold soup dish, that, well, keeps you cool on a hot day. In Europe we pretty much don’t do cold pasta or soup dishes. There’s a salad made with cold macaroni and mayonaise, and there’s a cold red beet soup (chłodnik).

Was that very weird?

*the other is that Slovenia is obviously nicer and has a seaside.