My hometown of Tolmin has fewer than 4,000 citizens. Lausanne, in Switzerland, has 140,000 (and shops that close earlier than in Tolmin). In both towns, people live in large single houses or small apartment blocks. This is the way people live throughout the Alps. You could take a paysan from Pully, plop them in Ptuj, and they’d understand the town (though not the dialect).

Now I live in Bundang, a town twenty minutes south of Seoul by metro. The building I live in has 1500 residential units. Rounding roughly, 4,000 people call my apartment block home.

SimCity 2000 (1993) has a late-game building called the arcology*, a city in a building, each holding many thousands of hard working sims. I loved it. Obviously, the goal of SimCity was to maximize the number of sims, and the arcologies were, obviously, the best way to do this.

Most Alpine people shudder, in a delectable mix of horror and schadefreude, when they think of megacities of millions. They grill sausages by cold brooks and hydroelectric lakes, and discuss how terrible it must be. People living on top of people. Crowds, everywhere. Congestion. Constipated, terminally repressed societies. And did you see that Kowloon walled city? That’s what it must be like. Can’t even visit the bathroom without a thousand people seeing you.

Occasionally someone remembers Le Corbusier, the crazy Swiss architect. His Plan Voisin to rebuild Paris into a cruciform paean to the building as a machine for living. His inhuman modulor. His modernist madness.

Far better the faux-ancienne chalet. Pine panels and oak floors and thick walls and small windows to keep out both the neighbors and the cold of night.

And I completely agree with this Alpine perspective. For residential housing, Alpine houses are the best bar none. Especially Slovenian ones. Those are totally the best.

But arcologies are epic, and I have to say, my modern Korean apartment block is really cool. I can take an elevator to the 24-hour convenience store, the shops, the restaurants, the doctor or the recycling center. Everything, from parks to public transport is in walking distance. The sheer convenience of the arrangement is astounding. And my apartment block even has a piece of public art called, appropriately, “The Harmony of Civilizations.” The piece is as wonderfully cheesy as it sounds. 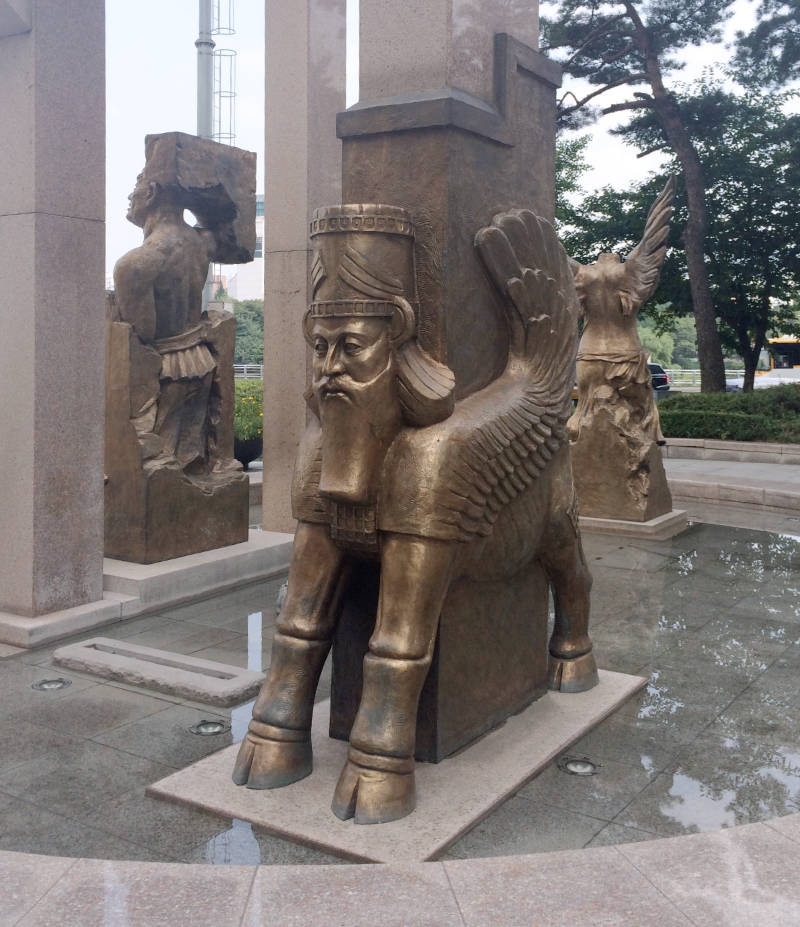 It gets even more astonishing when the social ecology of my apartment block is taken into account. It is a case study in combining high population density with high public utility, access to services, useful public spaces, comfortable living conditions, safety and individual opportunities. Not least, it means that though I live in a city of a million, part of an urban agglomeration of 25 million, I can go for a hike in the woods, on foot, from my front door. Something I had a hard time doing in most of the post-Roman cities I experienced in Europe. Something I didn’t even attempt when I visited the post-English cities of the United States or Australia.

There are problems, of course, but I must be a bit of a Pollyanna to bring some balance to European perspectives. The Alpine horror at writhing anthills of faceless drones. The Anglo-American fantasy of high-density urban crime and decay. Those are ideologies that blind people and politicians to the opportunities of modern architecture and ecology**. Perhaps it is not necessary to bulldoze all of central Paris, but a little bit wouldn’t hurt and the plumbing might improve.

The arcology is here, it is cool and rather comfy.

*Arcology is Paolo Soleri’s (1973) concept of cities which embody the fusion of architecture with ecology. The arcology concept proposes a highly integrated and compact three-dimensional urban form that is the opposite of urban sprawl with its inherently wasteful consumption of land, energy resources and time, and tendency to isolate people from each other and the community. Miniaturization creates the Urban Effect, the complex interaction between diverse entities and individuals, which mark healthy systems both in the natural world and in every successful and culturally significant city in history.

**Notice the sneaky literary move here, how by mentioning people and politicians separately, I build a distinction between humans with souls and humans without?