Slovenia is a mountainous country and Slovenians are deeply wedded to their mountains. Every town and village has its own hiking hill. The tallest mountain of the land is our national site of pilgrimage. That mountain is named Three-headed (Triglav), just like the pagan Slavic trinity that gazes into the three worlds: the skies, the earth and the under-earth. That pagan bit gives the pilgrimage a neat bit of spice.

As a child I had a love-hate relationship with hiking. We lived in Africa for many years, but our family visited Slovenia every summer and Slovenia always meant hiking. Hiking meant many dreadful things. Waking up at ungodly hours. Dew-soaked grass in the frigid pre-dawn. The diktats of Father’s wristwatch and pace. Blisters. Quizzes on the names of far-off peaks.

It also meant some good things. Hunting for the white and red circles of the trail marks. Spotting the occasional red and yellow circle of the trans-European trail. Writing down my name in the hiker victory book in its little metal case on the summit of the mountain.

Something of that stayed with me. I climb mountains, hills, and towers when I visit a place. I don’t get up before dawn, though. That’s hell.

Korea is also mountainous and Koreans also love their mountains. Their spiritual mountain Baekdu is just a little shorter than Triglav, at 2744 metres compared to 2863. It’s also on the emblem of one of the Koreas. Unfortunately, it is in the other Korea, which is why very few of the Southerners I know go there.

It’s also an active stratovolcano that erupted in 946 CE creating the 5km wide lake at the summit of the mountain. Pretty cool.

But I’m not going to talk about overloaded national symbols, Slovenian or Korean, because they are like happy families. Stuffed to the brim with contradictory stories, traditions, myths, and closeted skeletons.

I’m going to talk about the merry stick figure.

One of the things that strike me in Korea are the green hills. Towns of high-density residential tower blocks sprawl on plains and valley bottoms, while the slopes and peaks seem pristine and untouched. In Europe I was used to photos of identikit apartments, bunched together, stretching endlessly, obscuring any natural environment. Like the hives of an industrious collective consciousness.

It turns out long-focus lens and some framing will do that.

Even in the middle of Seoul, a metropolitan area of millions, I was never out of sight of some large green mountain or other. Invariably, that mountain was covered in hiking trails. And outdoor gyms. Invariably, those trails and gyms are full of people exercising. Anything that is good for your health will win plaudits in Korea.

One day I walked up Bukhansan, just north of the old palaces of Seoul. It was a cold wintery day with a drizzle shading into snowflakes. Much of the main trail follows the restored city walls, before emerging on the bald granite head of the mountain. Crunching stone, dirt, pine needles and staircases was hardly demanding, but the view of the city was spectacular. A good use of a few hours.

About thirty minutes into that hike, the trail split into three. Two rough and eroded paths, and a neatly maintained one. A warning sign stands at the split. It is informative. Avoid the left paths, take the right one. Pretty clear.

But something caught my eye. The wooden sign fit the style of other official notices on the trail, but the content itself was something else.

The luckless stick figure hiker taking the dangerous trails is not a serious hiker. They have neither backpack nor hat nor walking stick. Also, they broke their leg. They are not a merry hiker.

The merry stick figure on the right, however, is a serious hiker. They have a backpack and a hat and a walking stick. And they’re even singing to themselves.

It was cute, funny, informative and tailored to its location.

But it was a hiking trail sign that came out of the Korean national park service. Out of an anonymous bureaucracy that handles hundreds and thousands of signs comes something like this. How?

Imagine an employee of the organization. They are alerted to a danger on this trail. What do they do? Fill out a form? Put up a barrier? Detail a request for the design of a unique creative sign to solve the problem that is then approved by the signage committee? That sounds silly.

Nobody who’s worked with committees, even in a small organization, would believe that a sign like this would be approved by committee. 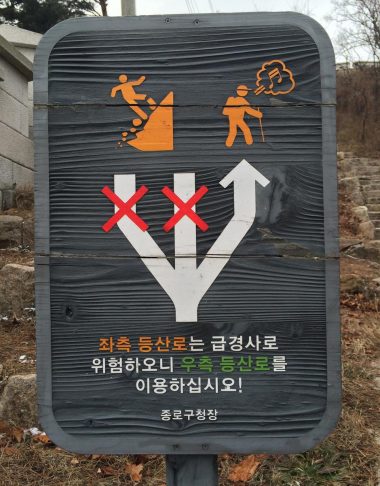 Seoul Zoo is run by the metropolitan authority of Seoul. Besides cute animals like lesser pandas and fennec foxes, it is also covered in cute and often funny hand-made blackboard signs by the zookeepers. The habits of individual animals are discussed, the behaviour of the primate pen pet cat Audrey is noted, the sad tale of a yellow-throated marten’s infected ankle is discussed with emoji and cartoons.

Goyang city (https://www.facebook.com/goyangcity/) is an even larger sensation, with its official social media dedicated to a small white cartoon cat (고양 – the name of the city, can also be read as cat). Its playful cat has grown from a website joke into the official mascot of the town, hosting events and holding interviews.

So let’s go back to that sign on Bukhansan.

An employee was alerted to the trail. They took their task seriously and made a helpful and humorous sign for hikers, whether they read Korean or not. And they implemented their solution.

As a European used to dull workmanlike experiences with official bodies, if I’m lucky, this is exceptionally unusual. Designers talk about creating moments of joy in apps (though it’s really about hooking us for one more click), but employees of Korean government organizations are actually doing it.

My hat is off to the artist who made the Sign of the Merry Stick Figure.

This article was first published in Slovenian in the weekly magazine Svet Kapitala, part of the newspaper Delo.