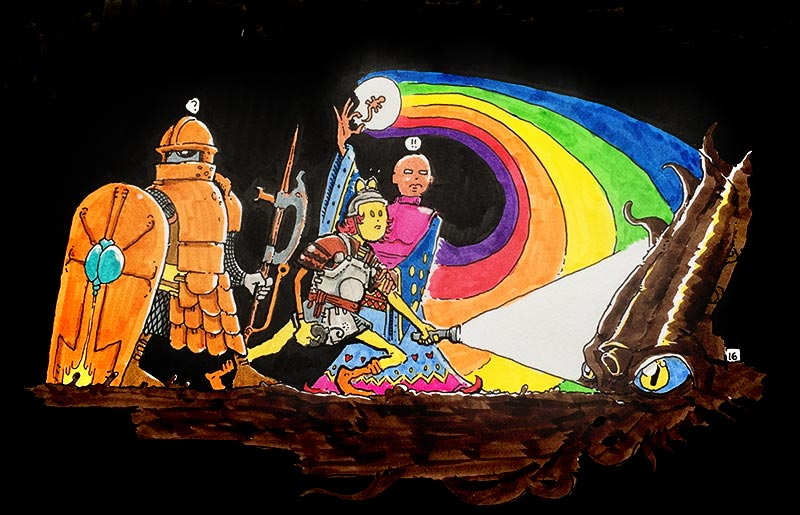 Many of my friends have made fun of them. Some, perplexed, asked “but, what are they?” A few play them. I’ve tried to explain TRPGs many times and floundered every damn time.

I think I’ve cracked the problem, but first we’ll journey far into the mists of time, before there was an internet, into the tropical paradise of 5th grade.*

When the world was young(er)

Our teacher read The Hobbit to the class and I was hooked. I devoured every fantasy book I found. I drew maps and little ball-shaped creatures and peopled imaginary continents with them. I was having fun, it was safe, it was cheap, it didn’t require driving, and it kept me out of my parents’ hair. What more could they ask?

A couple of years later some English boy started a Dungeons & Dragons campaign as an extracurricular activity in art class. He left soon enough and forgot his polyhedral dice. You couldn’t get them in Tanzania, so we divided up those talismans of adventure. And kept playing. Visiting South Africa I blew all my pocket money on three heavy rulebooks. More cult objects.

Then we returned to Tolmin. We had left Yugoslavia and came back to Slovenia. Countries come and go, towns stay. Let me rephrase that to make epic sense.

I brought games of dungeons and dragons from across the sea, from dream-time Africa, to a millennia-old settlement in the middle of the Alps.

I cobbled a group of boys together, and we played D&D. Regularly, more than less. We never convinced girls to play with us, probably because we were afraid to talk to them.

I’ve kept playing. Even women play with us now. But always, “and what are TTRPGs?”

TRPG is a stupid term

I struggled to explain. Hours, days, weeks spent playing and I couldn’t describe it. A surfer rides waves. A gambler wastes money. A writer marks sounds. A TRPGamer … does what? I thought I was inept. But, no.

The name of the hobby is an exercise in confusion.

Role-playing. This is a therapy and training technique. You know, acting out the part of another person to better understand them.

Game. This is the worst culprit! Say this innocuous little word and everybody thinks of cards, or dice, or dominoes, or bowls, or chess, or the damned Olympics. Things that you win.

Once a week, if we’re lucky

A group gets together, plays. It’s like a musical jam session, but with stories and imagination for instruments.

We use game systems during play to bring order and chaos, roll dice to build conflict, draw cards for resolution, whatever. The mechanics are interesting, but the players are the heart of the session. People sharing jokes, telling tales, eating food. They make these ill-named TRPGs amazing.

We sit around our symbolic fireplace of dice and relive the ancestral experience of the tribe against the dark.

In D&D there’s a player called the dungeon master. Most TRPGs have them and they’re responsible for the rhythm and harmony of the session and group. That’s my usual role. I like to imagine it’s like being a bass player. I can’t play the bass, though, so maybe I’m wrong.

Other players like to be stars, like singers in a band. Some thrill with their technical mastery of games and rules, like guitarists or drummers. There might be a tambourinist or dancer or backup vocalist along. Sometimes a lucky group even gets a roadie who plies them all with food and drinks while playing. Roadies are the best.

And we play together, and have fun, and go home. What do we get from it?

We get stories. Ridiculous, funny, unforgettable stories that grow out of our communal fantasy jams. Stories of princesses in power armor. Of catapulting sheep. Of shaman-barbarians riding silver dragons into the sky. Of smart wizards accidentally smeared into paste. Of golden goats. Of heroic cat lady dentists.

And we find friends. Years later, we sit down together. We have a beer, we complain about taxes, we gripe about traffic, we bitch about tourists, and we remember Elendil the ranger stealing a dragon’s eggs and pinning the blame on a local village so he could buy a new suit of mail. And the world is lighter.

And that’s why these play-times called TRPGs are fucking awesome.

*My family lived in Dar es Salaam, Tanzania between 1988 and 1996. That’s in East Africa, and where I spent my first eight years of school.

***There are people who disagree. Lots of serious folks taking their game seriously. You can read a very boring description of TTRPGs on wikipedia: https://en.wikipedia.org/wiki/Tabletop_role-playing_game