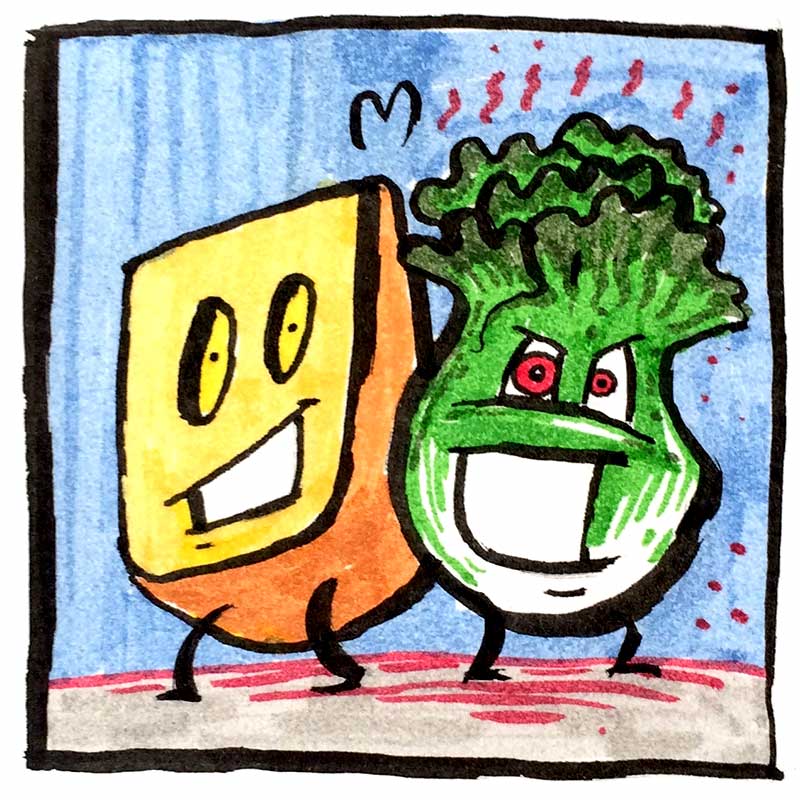 Early in our relationship YL had a great fear.

We met in Lausanne, the edgiest and most crime-ridden city in Switzerland. This means that the city is very safe. Old ladies with manicured dogs dominate the promenade and three night-clubs stay open late on weekends. This also means local taste is adapted to saucissons, choucroute, fromage and patates.

To her this bland assemblage of sausages, boiled cabbages, cheese and potatoes sans epîces was typical of an exotic palate unsuited to the passionate spiced melânge of Korean food. From burning gochujang to salty shrimp sauce, jelly-like pickled crab flesh or chewy rice cakes.

She was terrified I would be constitutionally incapable of eating Korean food.

Her friends in relationships with other Europeans complained of beloved dishes they could not enjoy together. She read tales of bereft Korean women longing for the tastes and smells of home.

We had been together for many months before she dared introduce me to kimchi. “I love kimchi,” she said, “and I was so afraid you wouldn’t like it*, because it would be so hard to live with you, but without kimchi.”

I found this experience very novel. I had been exoticized.

This is something everyone does all the time. I visited Bali and saw people making coffee like it were cocoa, and it seemed very odd. But they do it all the time! It’s ordinary to them!

I saw the everyday dishes of East Asia as special dishes for special days. Sushi as a pricey delicacy for special occasions, not what it is: raw food, served fresh. At the same time, it seemed easy to imagine it was the only thing people eat there. You know, just like the Swiss eating nothing but fondue.

As a European** it is so natural to exoticise other continents that feeling the reverse is interesting and sobering.

The truth is that both a European gaze and an Asian gaze, or more specifically, a Slovenian gaze and a Korean gaze, intersect, overlap and still miss the largest part of every individual, idiosyncratic experience.

Anyhow, I tried kimchi. I like it, but won’t say I love it. That’s ok. But there’s a catch.

All the exoticization in the world isn’t going to change the ridiculously funny fact that at both ends of the Eurasian landmass there are cultures that hold cabbage as a cornerstone of their identity. Sure, they call it different things: choucroute, sauerkraut, kislo zelje, kimchi.

An imaginary strawman in a mime’s costume jumps up and shouts, “There are big, huge differences! Our Alsatian choucroute is always cooked in wine!”

Cosmetics. At the end of the day it’s pickled Brassica oleracea.

Also, you don’t have to wake up so damned early. Viva, the ordinary.

*Let it be noted that kimchi is pungent.
**How the Peripheral Europeans hugging the wet and windy Atlantic Shore exoticize the Core Europeans of Central Europe is another story that I really should tackle at some point.

Post Script: After YL introduced me to kimchi, aka. Korean red-pepper-spiked sauerkraut, as I call it, I hatched a plot. As soon as she left for a week-long trip I would make homemade kimchi and surprise her with it. I had never before fermented a single thing in my life. I learned experimentally that fermenting cabbage in a jar releases gasses which can build up very high pressures, indeed. Certainly high enough to paint the kitchen red.

Fortunately, enough remained for my experiment to be considered a qualified success.