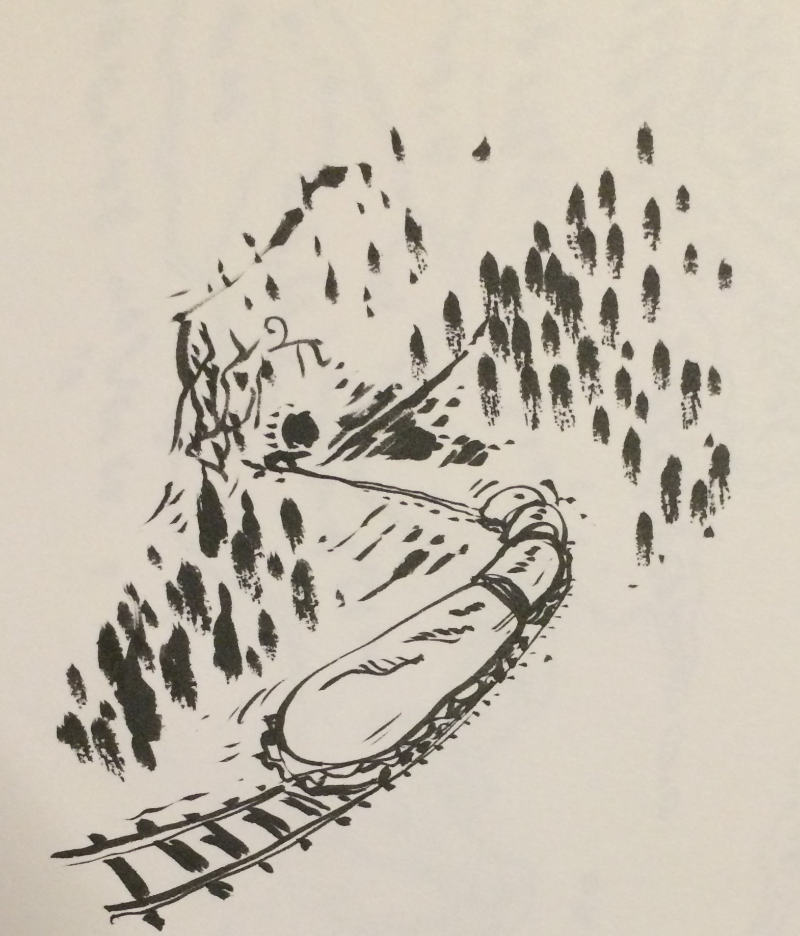 I was sitting in the once-red train of the Slovenian Railways heading north from Ljubljana to Jesenice, under a harsh-blue sky and snow-capped mountains, repeating a journey I used to make nearly weekly when I was a student at the University of Ljubljana. The train was the same as a decade ago, a bit more worn out inside, and much more thickly decorated with graffiti on the outside. In Jesenice I would change trains for the much older, much rumblier, train down to Most na Soči. Memory railways.

This was my longest stay in Slovenia for many years. A month of rain and clouds, of tree-shrouded hills and blazing white mountains. The world pressed close and closer in that grey winter month, the horizon shrank, and emotions loomed large and ominous.

I had done something unusual. Something very un-Slovenian. I visited Ljubljana properly, like a visitor. Booked a hotel room for myself and gone to see old friends and old places.

“Why are you spending money on a hotel? Don’t any of your friends have a guest room or a sofa? You can stay at my place!” remarked every one of my friends.

“We don’t get many Slovenian visitors,” was the surprised reaction from the hotel staff.

“That’s some unusual writing,” they added when they saw the Korean hangeul on my credit card.

In the year 2000, eighteen years before, I had gone to Ljubljana as a student. I had been terrified and impressed and small and confused and lost. The professors had loomed large, almost grecian gods, their positions Olympian, their words and thoughts profound and momentuous.

That first day in Ljubljana I had visited a Mercator supermarket. The retail chain was nearly a monopolist at the time, overpriced and patriotically over-prized. In the gleaming aisles of that store I’d stopped at the deli counter and ordered something I could be sure of. Something simple, small, and familiar.

“Wuat’ll you have?” piped up the lady at that counter in the frog dialect of Ljubljana.

“One panino with pancetta,*” I’d replied.

“Wuat?” her eyes had bulged, “Panino? Pancetta? Wuat’re those, then?”

“A bacon sandwich,**” I corrected myself.

The bacon and the bread and the sandwich itself might have been the same, but they hadn’t tasted right because the words had been wrong. I had found myself in a strange land where I couldn’t even order a sandwich without feeling funny.

Wind forward to 2018. Halo, Laibach. Half a lifetime later and I was a visitor from Seoul in South Korea in East Asia. In Lublana nothing had changed, but everything looked different. The buildings smaller, the streets cuter, the people less intimidating.

I visited my faculty and the halls where we quavered before exams. I wandered the library that had been so brand new years ago that I had felt too self-conscious to study there. The room where I had waited to defend my thesis was now devoted to collections on Oriental studies donated by China, Japan, and Korea. I had a coffee with my thesis advisor and chatted about doom metal and new bands worth seeing.

I dropped by the ad agency where I had started out, and ran into my old coworkers, still smoking in the brainstorming room.

Relatives and friends, cafes and cake shops, bistros and bookshops. I even ran into a few familiar faces on the street. The big city, our Slovenian metropolis, had become a cozy Hallmark town to stroll about. I found myself in a strange land where I could read all the shop signs and could listen in on every bit of breathless gossip shared over cigarettes in the outdoor cafes.

I had to switch trains at Jesenice, so I got off. The walls of the station held yellowing plaques and museum signs commemorating the opening of the Vienna—Trieste line in 1906, one of the biggest achievements of Imperial Austro-Hungarian railway engineering. Funny men with big moustaches and fluffy-feathered hats stood about, congratulating each other, and toasting to a bright future for the Habsburg Empire.

Half an hour later I got onto the dull-red-and-once-yellow train, older than the conductor himself, heading south from Jesenice to Most na Soči. The sun sneaked behind every high-wooded hill and the ventilation and engine competed to see whose asthmatic rattle and choke could be louder. The two stumpy cars were covered in a cultural history of graffiti as they rattled down the railway of the future, towards the largest stone arch in the world.

“Perhaps tomorrow,” I thought, “I really should go and have a panino with pancetta again. That’d be novel.”