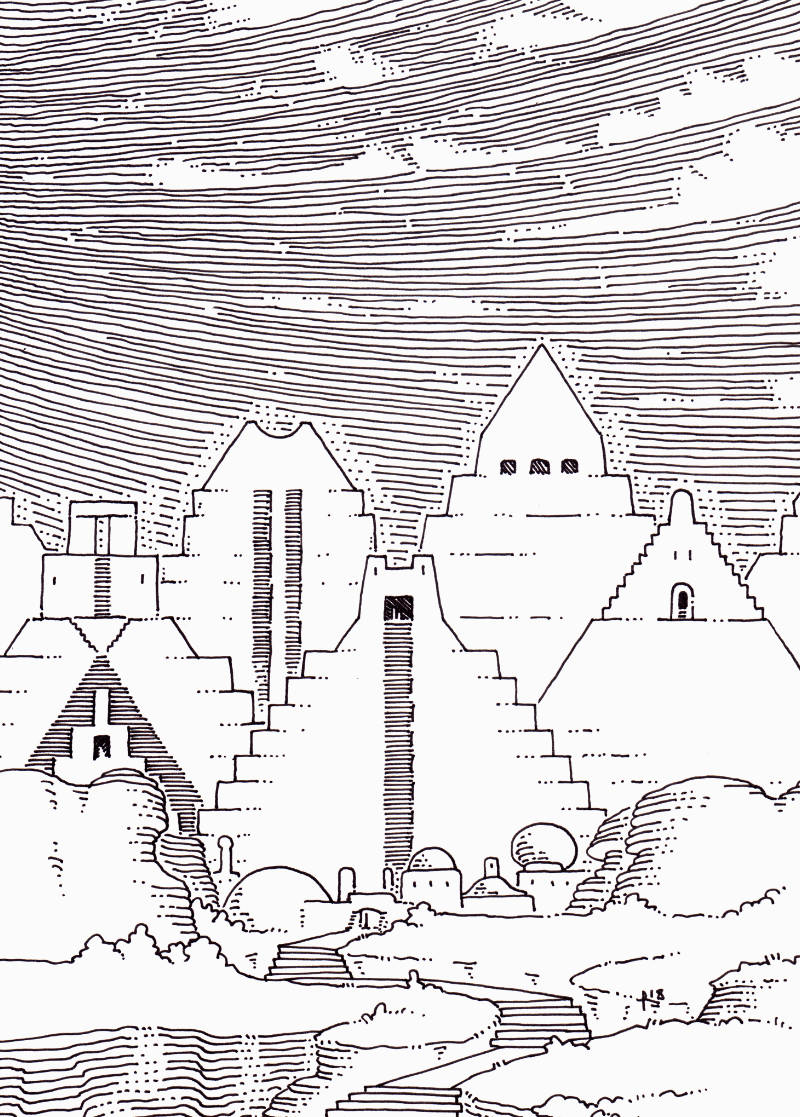 On the 22nd of February, Bastien Wauthoz aka. Acritarche, wrote to me about illustrating a series of cards for En Terres Sauvages, crowdfunded as a supplementary goal to Bastien’s French translation of the Perilous Wilds by Jason Lute. I agreed, and sixteen scenes to illustrate arrived in my inbox.

This will be easy, I thought.

And proceeded to miss the deadline by three days.

Humour me. I will show the artful ligne claire illustrations I did for the Terres Sauvages, in homage to both the unforgettable Jean Giraud ‘Moebius’ and Hergé of Tintin, the Belgian artist who had such trouble drawing women. I will, I swear. But first, I will digress into the past.

It is now approximately 365 months since I drew my first comic. I always loved art and to draw, but to think myself an artist? Hardly.

I was confirmed in that feeling by my experiences of art in a Mountainous Land. At my first art show, as I was setting up, the cleaning lady let me know, very firmly, that what I was drawing was garbage, because it didn’t look real. In my last year of high school my philosophy teacher plied me with whiskey, gifts of cheap second hand books, and access to his Heavy Metal back issues, in exchange for my original illustrations. In my first year of university, the young democrats (or some such) commissioned me to do an illustrated poster for the elections to the student parliament; they took my artwork, paid me not a cent, then had a member of their party recreate my illustration and paid him or her instead.

Many such experiences piled together, and the artists I did know where all shades of shoddy-verse-spouting, ragged-beard, ruddy-nosed inebriate. To say that I tamped down on my hopes of ever doing art, well, it’s a bit of an understatement.

I suppose it takes a certain courage to stand up for yourself, no matter what you do.

Well, I didn’t have it. Indeed, as a student of the serious and stuffy topics of international relations, I feared art—not to mention controversial art featuring such risqué subjects as nipples and heavy metal bikinis—would brand me too weird, too strange, too improbable.

And I was branded weird, already. After all, my classmates called me ‘Africa’, for no other reason than that I studied in Tanzania. Yes, years later, when I finally watched Mean Girls, I truly identified with Lindsay Lohan’s character.

It was with trepidation that I publicly associated my name with my art in 2013, and particularly with the OSR DIY call-it-what-you-will online table-top role-playing game community on Google+. I found an audience, and slowly, I found my voice. Or my pen and brush.

And I can return now to Bastien.

It is still strange for me, when publishers and writers come to me, and flat out say, “I like your work! Could you make art for my game? For my book?” I no longer feel a trepidation, these days I a hint of confidence and know I can deliver. But I still feel that frisson, “Wow! Somebody likes my art and is willing to pay for it!”

Thank you, Acritarche, for being one of those helping me recover from the anti-art savageries of the Mountainous Land.

Was that cool or what? I certainly had fun. But there’s more. You, too, can support me as I write and draw fantastic lands and games, by joining in on my patreon, where I am currently in the final stages of a journey through a fantastic Ultraviolet Grassland.

At this point, again, thank you to everyone who’s believed in my art. Slowly, I’m realizing that I might be an artist after all.