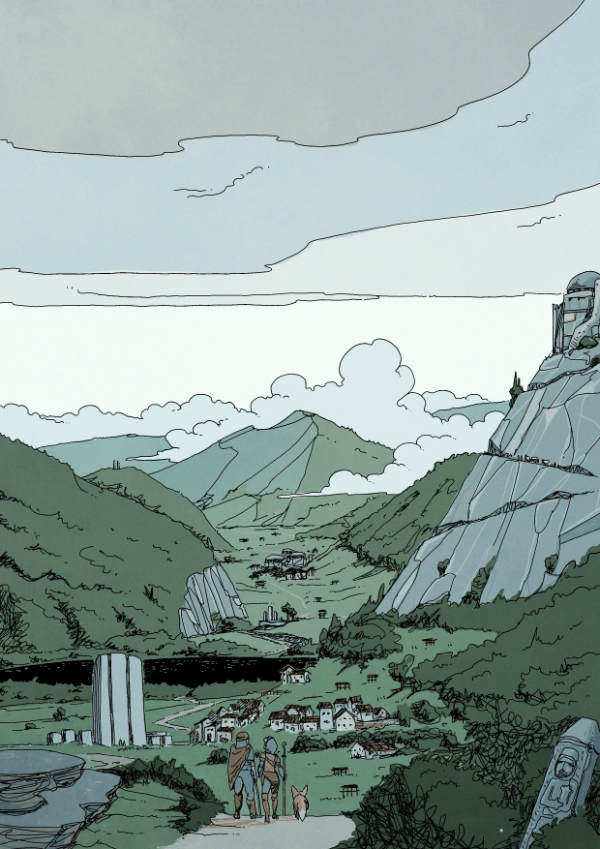 On Friday the weather threatened rain. Pregnant, cumulous clouds in shades of gray, slate, and purple rose above the border and tumbled across the sky. A dull wind blew and rustled the leaves on the vine as I plucked grapes to eat in my parents’ yard. The sky growled. I looked up as a drop fell, then another.

The weather-crunching machines had suggested rain, as had the televisions students of things high above.

The forecasts failed, and the rains missed us for a day.

I had predicted months ago that I would complete my first book—the Ultraviolet Grasslands—in August. I did. Shortly after those false prophet droplets I put the last touches on the text, spent a perhaps unnecessary hour on a promotional illustration, packaged the .pdf and uploaded it with a typo on the cover that I would set about trying to fix later that night after somebody helpfully pointed it out.

The typo was useful. It reminded me that my book was not perfect, but it was finished. And that is good enough.

For the longest time I have felt faintly guilty, uncomfortable about writing with my voice or about what I liked. A year and two days ago I came out of the closet about being an artist from an art-shy mountain town. I hadn’t then yet dared to use the term writer.

For the longest time I had sought reasons for my discomfort. My parents? My experiences? My upbringing?

I replied, a bit snidely, “you did most things right, so I do not write about them, because they do not hurt. It’s like a pebble in your shoe—the smallest things demand the most outsize attention.”

This was, of course, true.

But a few weeks ago my father shared excerpts from his diary that put some of the most confusing memories of my adolescence into a far different light.

27.02.1995 “… Yesterday I read Luka’s essays. I must say, that he is far beyond me. I was accounted a good writer at his age, but I think that in direct comparison, I would not even reach to his knees. His style is very similar to Stephen King, which is not surprising after all those books he’s read! His teacher even wrote to me that he might one day earn ‘one million bucks’ if he will write this well!”

A year after that entry we returned from Africa to Slovenia, and I went from an English-language international school to a Slovenian-language grammar school.

Suddenly, from being able to play with language, it was like wading through half-crystallized honey.

I was taking afternoon classes to try and catch up with my Slovenian, but it was nightmarish and boring.

All the books were boring.

The Roast Veal (Telečja pečenka), a shit 19th century Slovenian novella about a small-town retired colonel whose only joy in life is a fucking roast veal, and then one day he sees the restaurant kitchen where his roast is made and his life is ruined and he dies. Fucking garbage.

The teacher with the speech defect who said, “interpret,” but meant “repeat what the academic Janko Kos wrote in his Textbook of Literary History and Theory.”

I was taught to respect my teachers but now, at 18 years remove? The cow.

Still, at least she wasn’t giving back rubs and neck massages to the high school boys during class, like our chemistry teacher liked to do. That was one incompetent chemical blonde with cyanide pink lipstick.

The best praise I got from my Slovenian teachers in those formative ninth and tenth grade years?

“Luka has interesting ideas, but until his grammar improves, that’s no good.”

And, to drive the lesson home, I lost marks on a high school English exam for using advanced grammar that the class hadn’t taken yet. Perfection.

So, now, half a life later?

For the longest time I had wondered why I was so uncomfortable with writing and art. Certainly, everything played a part, but the simplest, clearest answer is plain: mostly because of a school and a few teachers.

Still, discomfort is boring, and even those answers are as dull as having to take a leak, but finding out that somebody had thought it was a good idea to remove all the toilets on the regional train.

Quod erat after-bloody-all, I’ve written eighty-thousand words of a psychedelic metal game world and role-playing adventure rolled into one neatly packaged .pdf. Sure, a cruel editor will now wield a scalpel, layout will follow, some edges will be filed, others will be honed.

After I finished, I felt a sense of relief. A bit of emptiness, like feeling I could eat a meal again. A bit of excitement, since there are so many other things I want to write now.

But most of all, after so many years of feeling blocked, uncomfortable, stuck, unable to finish writing something, I felt mildly disappointed.

Years and years of not writing, furtive writing, not-finished-writing, meandering writing, avoiding-writing, it’s-not-really-writing-it’s-just-for-work, and telling myself I don’t like writing.

And this is all there was to it?

Not even disappointing or frustrating enough for a solid bit of raging against system or machine. Just the slightly sad story of a keen boy and some provincial teachers in a system of nationalist education in a small mountain country.

I’m not about to finish this little piece on a note of disappointment. After all, I just finished a book! And it was pretty easy.

Writing is an act of rebellion against entropy—just like every other creative activity, from cooking books to carpenting buildings—a human-sized fist shaken in Thanatos’ face. But it takes three crucial things, just like any other thing.

First, you have to understand that you are allowed to do it. If you believe that you can’t, well, that’s that. So much of growing up is learning the hard way that you’re not special, pretty, or important, you silly cog, you. Well, you have to keep that walnut of wonder, that hazelnut of hope, that kernel of creativity.

Third, you have to accept that you want to do something. I think this is the hardest—cogs shouldn’t have passion, passion is dangerous when you have to keep the machine running. I don’t think passion is necessary for creativity, no. It’s necessary to sustain yourself through the hours and hours and hours of practice it takes to get good enough to actually do what you’re after.

Fourth, you have to give up on the idea of perfection. There’s no time—you have one life, the heat death of the universe is hunting you, and finished is far better than perfect.

And fifth, if you’re now going to say I said it takes three crucial things, please refer to the previous paragraph.

If you’re curious to see the current roughly laid out Ultraviolet Grasslands, you can access it for a measly $1 at Patreon, or get the free intro version at Drivethru. No, it’s not a novel. Yes, it’s an ttrpg setting book. Enjoy.