There is something magical about action at a distance. You move your limb, extend your hand, make a ritual gesture, and the world changes before your very eyes.

The elevator. The escalator. The automatic door. They are all utterly captivating.

Living in a city, it’s easy to take them for granted. Part of the scenery. But think about it for a moment.

If Catherine the Great wanted an elevator, she had to have a team of servants and animals strain at heavy ropes to lift and lower her. If the Qianlong Emperor wanted moving stairs, he needed porters to carry him up in a sedan chair. If the Archduke of Austria wanted a magic door that opened on its own, well, he was out of luck. He was killed 17 years before they were invented.

These things are marvels of our modern age.

My first memories are of living on the fifth floor of a five-storey apartment building. That was the highest building in our town, because building codes required elevators for buildings with more than five stories. This was more expensive, and thus not done in the late 1970s in our small Yugoslav town. So we walked, up and down, every single time.

It was good exercise, let me tell you.

All these things my childhood mind filed away under the “magic of modernity.” I still love playing with them. Taking a few steps backwards on an empty escalator, to make the ride go longer, making automatic doors open and close, and riding every elevator to the top of a building when I can. The view from the 33rd floor is amazing, after all!

All of these are present in Korea, but one of them is fundamentally weird to me.

Everywhere else I have been, the magic door would use its photoelectric ‘eye’, detect my movement, and (usually just a bit too slowly for my stride) slide open. If it didn’t make a sound, I would add the Star Trek ‘whoosh’ under my breath, to make it suitably epic.

Now, there are some of those in Korea, but not many.

Most are what I call the ‘push-auto’ doors. They come with a small, rectangular plate mounted on the door, about the size of a 1990s TV remote control and helpfully covered in writing in multiple alphabets.

For the first several months, I would regularly walk up to this door and wait for it do it’s autonomous thing and whoosh open for me. Without fail, it would fail to do so.

See, the ‘push-auto’ door demands a physical press to open. It is a button door.

Now, ok, having experienced the Korean summer (sweltering) and winter (gelid), I can ungratefully mumble that there may be a point to stopping doors from whooshing at my mere approach.

But I remain annoyed at them, and not just because they are not proper magic doors! Though I am a reluctant designer, they hurt me, and hurt me deeply, every time I use them.

To make the door whoosh open, you have to push ‘auto’. 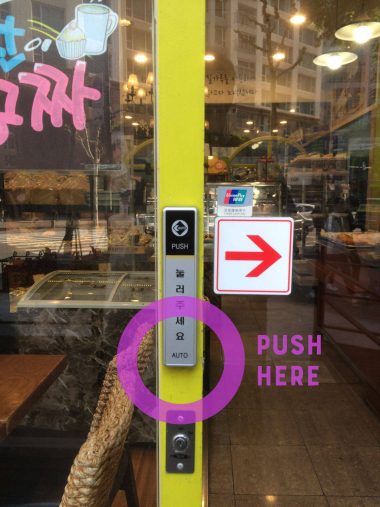 Many things in Korea are designed very well. The ‘push-auto’ door is not one of them.