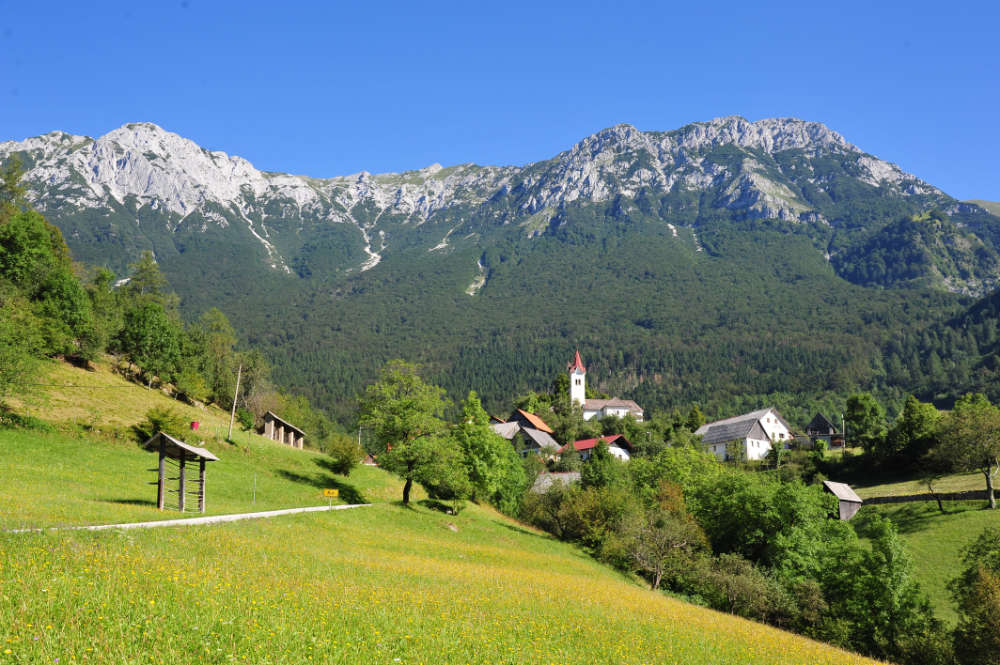 Korea is very far from Slovenia. Though airplanes hurtle us through the air at hundreds of kilometres an hour in the aluminum bottle bodies, it still takes very nearly a whole day. Add in the jetlag of an eight hour difference, and it becomes an ordeal. I visit once a year, rarely twice.

This year I planned to stay for a couple of weeks at the end of August, but mediaeval events surprised me.

My father hails from the small settlement area of Rut—pronounced with a voiced alveolar flap [ɾ], a close back [u]) and a simple [t]—sort of like pronouncing the English word “root,” but with a tapped (not trilled) Spanish “r.” I could make it look middle-earthen with a an û, but I won’t.

The area consists of thirteen villages scattered on the slopes beneath the mountain ridge that stretches from pyramidal Rodica (Born/Birthing[?] [Mountain]) to Črna Prst (Black Soil [Mountain]), above the run of the torrential Koritnica (Basin/Storm-Drain [Stream]) which drains into the Bača (etymology unclear), opposite Porezen (Cut Down [Mountain]).

This remote region of highland villages was settled by colonists from Innichen in the Pustertal (Puster Valley), in the Tyrol, and, until the First World War, the inhabitants of Rut yearly sent Käfergeld to the Innichner church to pay for prayers against plagues and vermin.

After my father, Lucijan, returned from his studies, he settled in Tolmin, the capital town of the then eponymous municipality on the upper reaches of the Soča River, into which the Bača flows via the Idrijca. In the 1980s, when my father Lucijan was the mayor of Tolmin, he reached out to the then-mayor of Innichen to let the mother-town know that their colonies still lived in what was then Yugoslavia.

A small delegation visited from Innichen in June, and after that, every few years, a group of Rutars would head to north-west, to Südtirol (South Tyrol), and a few years after a group of Innichners would head south-east, to Severna Primorska (Northern Land-by-the-Sea).

2018 was a special year, because it marked the eight hundredth anniversary of the first settlers receiving the deed of settlement from the patriarch of Aquileia. Aquileia was a temporal episcopal state straddling what are today the Italian province of Friuli and western Slovenia. The then patriarch, Berthold von Andechs-Meran, was one of the younger children in the large brood of duke Berthold IV of Merania, who held lands in Bavaria, Tyrol, Dalmatia, and Istria.

Young Berthold was originally named the archbishop of Kalocsa, in Hungary, and his older sister Gertrude became queen of Hungary in 1205. The Hungarian king gave him fun titles, like ban of Slavonia and voivode of Transylvania. He was 24 at the time and that whole escapade went south in a welter of corruption and preferential treatment for friends and family, ending in 1213 with a group of Hungarian magnates raiding queen Gertrude’s hunting camp, while her husband, Andrew II “of Jerusalem” was out campaigning in Galicia-Volhynia. They assassinated Berthold’s sister, while he and a few other Germans, including Leopold VI Babenberg, “the Glorious,” duke of Austria, bravely ran away with their lives.

After five years as an exile arch-bishop, pope Honorious III finally granted Berthold a replacement title in 1218, so he became the Patriarch of Aquilea. He must have felt he’d come down in the world, and decided to do something about his lands—and what he needed was people. So he went to his older brother, Otto I, duke of Merania, and asked him for some folks to settle in the woody hills in the east of his domains. His brother said yes.

The afore-mentioned deed was proclaimed, signed, and stored in the archives of Cividale, where it remains to this day, and a group of settlers set from their homes in Innichen, on a 200 kilometre trek, from one Andechs land to another.

The deed came with a pile of inducements to encourage the peasants to consider creating a new life in remote, thick-forested highlands, including exemption from taxes and tithes, local self-government, judicial autonomy, and the like. These local privileges lasted for nearly six hundred years, and a varied assortment of feudal lords, until they were abolished under Napoleon’s First French Empire in 1809, when the whole region was reconstituted as the Illyrian Provinces.

The First French Empire ended in 1814 and both Rut and Innichen returned to the Habsburg Empire, while in the lowlands the 19th century raged and Italy took shape. A hundred and one years later, a year after the outbreak of World War I, Italy broke its treaty with the Central Powers to join the Allies and attack Austria-Hungary (formerly the Habsburg Empire). Its reward was a swath of border territories, including Rut and Innichen.

After the war, local, non-Italian languages were suppressed throughout the lands of Mussolini’s fascist neo-Roman Empire. That empire collapsed in 1943, and Rut was liberated under the Second Yugoslavia, while Innichen remained San Candide in the Italian province of Alto-Adige. In the South Tyrol bombing campaigns for independence (or reunion with Austria) continued until the mid 1980s. In 1991 the Second Yugoslavia, also known as the Socialist Federal Republic of Yugoslavia, began to disintegrate with the secession of the Republic of Slovenia.

So here we were, in 2018, eight hundred years after settlement, with several dozen states come and gone, but the village still (barely) there.

I’d been certain that the ceremony to mark the anniversary had already taken place in June, like the meetings always do, but my father told me that no, it would take place on the 22nd of September. After half-a-day of back-and-forth I got online and moved my return flight by twenty days.

We drove up the narrow mountain road, along Basin Stream to the German Clearing under the looming mass of Birthing Mountain, and it was the evening of the last day of summer, the 21st of September. We walked around the old village, many houses renewed into chalets and weekends for people who now live in valley towns and cities.

We ate dinner with my cousin and her partner, who live there, in the old family house, under the spreading village linden tree and the church of Saint Lambert.

Folklore says the linden tree was planted when the village was settled, academics say the tree is five hundred, maybe six hundred years old. Let’s say it was planted together with the village, it makes a better story, and doesn’t change anything. Town councils met under the tree and judgements were proclaimed there. The trunk is over eight metres round and the inside is hollow, the result of a fire nearly two centuries ago. The canopy is a bit mauled these days, damaged in a great ice storm a few years back.

When my father was little, he pulleyed a table and chairs into the linden tree and played within. Since those days the opening at ground level had narrowed, and when I was little, I never wriggled all the way in, afraid I would be stuck inside the tree. You can still climb in, if you have a ladder. The hollow is wide open at the top.

Two years ago, in the August of 2016, my wife and I were married under that tree, on a perfect summer day, in sight of my grandparents’ grave.

That 2018 evening was warm, but cooling rapidly, and the day of the celebration dawned wet, cold, and grey. As the day progressed, the storm blew heavier, the clouds grew greyer, and the cold bit like an icy vise. My brother and his family had also all arrived, which made me happy, and my father overjoyed.

The Innichners arrived, and a few hundred Rutars and their descendants, we crammed into the old church for a catholic mass in Germand and Slovenian, then went to the big tent in the village square for the secular part of the ceremony, where speeches followed songs followed speeches followed songs, and ended with deer goulash and polenta and cake.

It was around six p.m., and it was quite well and cold. I suggested to my father that we head down to our warm house in the valley, instead of staying another night in the village like we had originally planned. He agreed.

We drove down the narrow wet road. It sparkled and smoked in the cold autumn evening.

A couple of days later, I was in the air again, catapulting from Venice to Amsterdam, then from Amsterdam to Seoul. A world and a few centuries away again, but not apart.